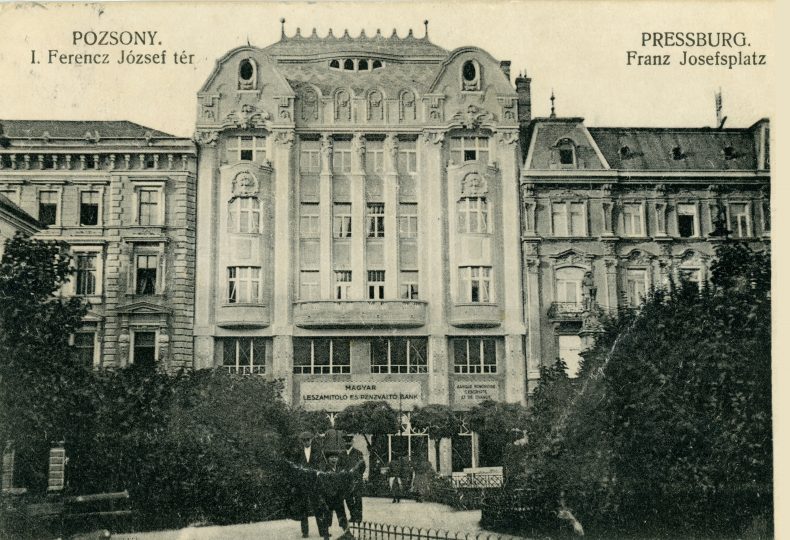 The building, once occupied by a major Hungarian bank, is the only modern era building found at Bratislava’s medieval main square and one of the first examples of a present-day banking house as such buildings were typologically defined in the early 20th century. Its architectural expression follows the principles of Jugendstil, a style then popular in Germany.

The building was designed by major Budapest architects Albert Kálmán Kőrössy (1869-1955) and Géza Kiss, whose architectural layouts were evident almost everywhere in the Kingdom of Hungary. It was constructed at the site of the original medieval Auer House. The ground floor housed the bank’s main hall, with its offices located on the floor immediately above it. The remaining floors were composed of apartments for rent. The artistic concept of the façade conforms to the function the building was intended to have. In the spirit of Gottfried Semper’s Bekleidung, or dress principle, the outermost architectural envelope is composed of a layer of stone tiles, with individual panels anchored to the façade by brass rivets, similar to how Otto Wagner’s Austria Postal Savings Bank in Vienna was constructed. The same material was used for the entrance door to the bank, which is equipped with a stylized grill and similar riveting. A trio of lesenes ending with atlantes separates the upper floor façade, while the attic gable is decorated with floral ornaments, laurel wreathes and garlands.

Several Secessionist elements have been preserved inside the building, such as the staircase railing, elevator shaft grilles and the fountain at the entrance vestibule. There are also glass figural mosaics located in the former banking hall, which later became a stylish cafe after the bank had ceased operations. The building was damaged in 2019 by a fire that broke out inside the cafe and the building is currently undergoing reconstruction.